The new fire station is going to be built on the site of the Juancho E. Yrausquin Airport. It is intended to replace the current fire station of the Caribbean Netherlands Fire Department [Brandweerkorps Caribisch Nederland] (BKCN) in the terminal building at the airport. The construction work is going to start in the first week of April. This unique construction project is going to be carried out by local contractor Saba Roads and Construction on the basis of commission by the Government Buildings Agency [Rijksvastgoedbedrijf] (RVB), on behalf of the Ministry of Justice and Security and in consultation with the BKCN. 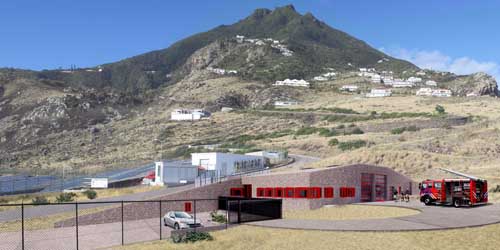 The new fire station will enable firefighters on the island to carry out their work more effectively. The current BKCN station at Saba airport is outdated and has limited facilities. For example, the air supply required when extinguishing fires can currently only be topped up at the fire station in The Bottom. The construction of the new fire station will change this because it is equipped with a separate air supply area. This can save a great deal of time in the event of an incident at the airport. The fire station will also include two garages which will accommodate two fire engines, sports facilities, a staff canteen, various work and conference rooms and sufficient facilities to prepare and carry out exercises.

When designing the fire station a great deal of attention was paid not only to the operational needs of the BKCN, but also to the building’s appearance. The fire brigade believes it is important for the fire station to blend into the island’s image. That is why the complex is partly being built against and in the rock face, so that it becomes part of the surrounding area. A decision was taken, in close cooperation between the architect, Lyongo Juliana (OZ Caribbean), the fire brigade and the RVB, to use local rubble to create a link with the characteristic historical architecture and landscape. The fire station construction has also been designed in such a way that it can withstand category 5 hurricanes. The new fire station is expected to be ready for use in the spring of 2022.