CBS: variable usage tariffs for electricity on Saba increased by over 26 percent relative to Q4 2020.

Consumer prices on Saba stable compared to the previous quarter

In Q1, goods and services were 0.1 percent cheaper than in the previous quarter. Food and toiletries went down in price, while the variable usage tariffs for electricity increased by over 26 percent relative to Q4 2020. 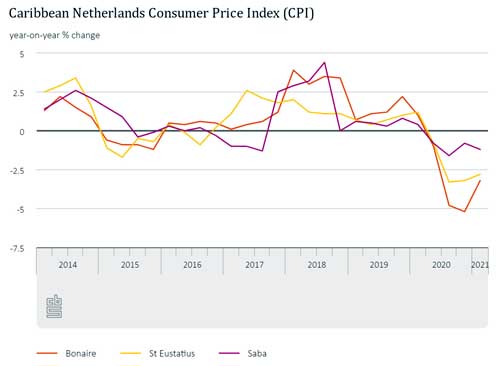 Prices on St Eustatius slightly higher than in previous quarter

In Q1 2021, consumer prices on St Eustatius were 2.8 percent lower than one year previously. The year-on-year decrease was 3.2 percent in Q4 2020. In Q1, consumers paid 0.7 percent more for goods and services than in the previous quarter. The variable usage tariffs for electricity were up by more than 10 percent. Petrol and diesel prices rose as well, by 1.7 and 3.9 percent.

In Q1 2021, consumer goods and services on Bonaire were 3.2 percent cheaper than one year previously. The inflation rate was still -5.2 percent in Q4 2020. Prices also decreased on St Eustatius and Saba, by 2.8 percent and 1.2 percent year-on-year respectively. This is reported by CBS on the basis of the consumer price index for the Caribbean Netherlands.

The low inflation rate in the Caribbean Netherlands in Q1 2021 is mainly attributable to the allowances for electricity, drinking water and internet, which have been provided by the government as of 1 May 2020.

Throughout Q1 2021 as well, the coronavirus crisis had an impact on how the Consumer Price Index (CPI) was compiled for the Caribbean Netherlands. Especially the lockdown on Bonaire in March resulted in substantially fewer in-store price observations that month.

The low inflation rate on Bonaire is mainly due to the reductions in the fixed usage tariffs for electricity and water on Bonaire as of 1 May 2020. In Q1 2021, electricity was 14.3 percent and water 16.0 percent cheaper than one year previously.

Relative to the previous quarter, in Q1 prices on Bonaire rose by an average of 1 percent. This was mainly caused by higher variable usage tariffs for electricity and water. Although the variable tariffs increased quarter-on-quarter in Q1, the total rate (the sum of fixed and variable tariff) remained below the level of one year previously.