State Secretary Raymond Knops (Interior Affairs and Kingdom Relations) will pay a working visit to St. Eustatius, Saba, and St. Maarten from May 16th  till May 20th. 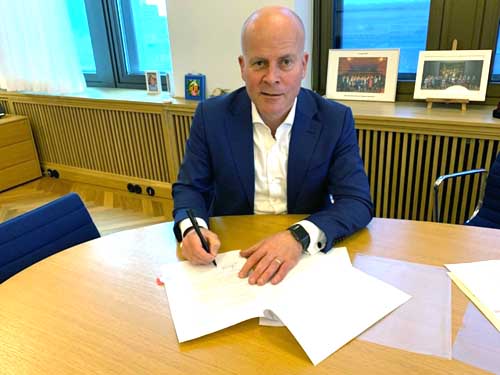 On St. Eustatius, the state secretary will have meetings with deputy government commissioner Alida Francis and island secretary Malvern Dijkshoorn-Lopez, the members of the island council, and church leaders.

Knops will, among others, visit a number of projects in the field of roads, nature conservation, and water supply and speaks there with various stakeholders.

On May 17th, the state secretary will arrive on Saba, where he will meet with island governor Jonathan Johnson and island secretary Tim Muller, the members of the executive council, the island council, and the OMT.

The program also includes discussions about the Saba Package and a visit to a number of related projects. A meeting with the Youth Council has also been scheduled.

On May 18th, at the end of the day, the state secretary will travel on to Sint Maarten, where he will speak with Prime Minister Silveria Jacobs about political and administrative developments. He will, among others, also visit a vaccination location and a number of projects.

The site Koninkrijk.nu gives some background information for the reasons of Knop’s travel:

State Secretary Raymond Knops decided that the fifth tranche of liquidity support of 39 million guilders will not be disbursed as long as the problems with Philipsburg airport are not tackled energetically by the government of Sylveria Jacobs.

Earlier this week, the Royal Schiphol Group threatened to withdraw all its support for the airport’s terminal reconstruction project as of 15 July if good corporate governance at Princess Juliana International Airport is not restored before 26 May.

The airport was completely destroyed during the passage of Hurricane Irma in 2017. USD 51 million was set aside for the recovery, supplemented by a further USD 50 million loan on favorable terms from the European Investment Bank. The airport’s liquidity position was also guaranteed by a USD 21 million reservation to keep it operational during the corona crisis.

A number of conditions have been set for this financing that should lead to the restoration of confidence in the management of the airport. For example, in line with international standards, security surveys would be carried out on members of the airport management and supervisory boards, now and in the future, and profile sketches for the board members would be drawn up.

According to Knops, this is being thwarted by the current general director and two members of the Supervisory Board. They set their own agenda and push decisions without following proper procedures. The third Supervisory Board member, who sits on the recommendation of the Royal Schiphol Group, is actively excluded from this.

Knops says he has held several talks with the government of Sint Maarten in recent months, in which he has repeatedly called on Prime Minister Jacobs to take responsibility as a shareholder and to do everything in his power to ensure that the reconstruction of the airport terminal can go unimpeded. to be continued.

But in practice, the Dutch minister notes, he sees ‘little decisive action on this subject’. Jacobs would dismiss signs of tampering as rumors, and would display the view that the government as a shareholder should stand at a distance.