CBS: Boys happier than girls on Saba and Bonaire

Both on Bonaire and on Saba, boys between the age of 11 and 18 are on average more likely to report being happy than girls. The main leisure activity of young people on Bonaire is gaming, while Saba’s youth also likes to spend time outdoors with friends. On both islands, over one-quarter say they often feel bored; on Saba, it is mainly the girls who often feel bored. This is indicated by new figures from the ´Scholierenonderzoek Caribisch Nederland´, a survey conducted among students in the Caribbean Netherlands at the end of 2020 as part of the National Youth Monitor. 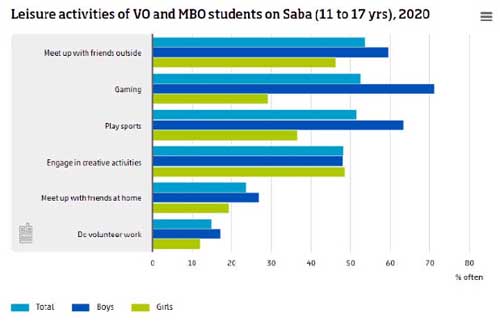 Both on Bonaire and on Saba, boys are happier than girls. On Bonaire, life satisfaction is also greater among boys than among girls; on Saba, this is virtually the same for both sexes. In addition, on Bonaire the average scores for happiness and life satisfaction are higher among those up to age 15 than among those aged 15 to 17. On Saba, the scores are almost equal for both age groups.

The complete report can be downloaded HERE (in Dutch).

In secondary education it concerns pupils, in MBO it concerns students. However, for reasons of readability, MBO students are also referred to as pupils in this news item.