The Public Entity Saba has submitted a Sub Plan of Action to the Ministry of Education, Culture and Science (OCW) and SZW for the construction of two buildings that will house the Sacred Heart Kindergarten, the Laura Linzey Daycare and the afterschool care of the Saba Girls and Boys Sports Society. 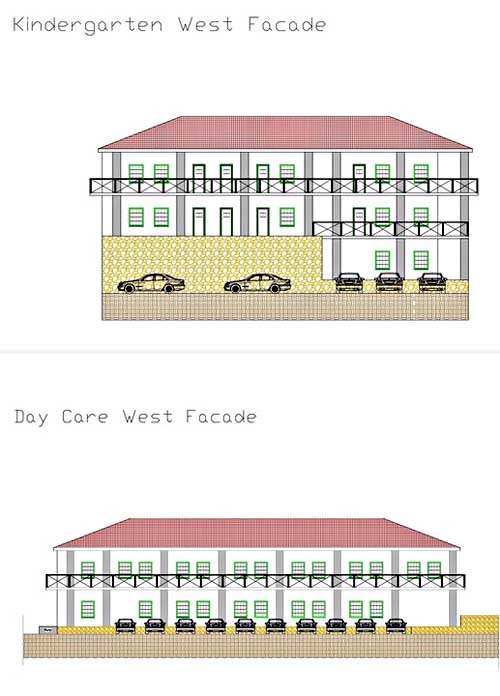 The urgent need for the construction of these new buildings in St. John’s, next to the SHS and the Saba Comprehensive School (SCS), was discussed during the Central Committee meeting of the Island Council on Tuesday, June 1. Several Island Council Members asked about the status of the projects to expand the SHS and to renovate and expand SCS.

Commissioner of Education and Finance Bruce Zagers explained that the Public Entity, through the Planning Bureau, has submitted a Sub Plan of Action specifically for the expansion of the SHS, to the Ministry of OCW and SZW. Consultations are taking place, and the plan and the associated funding will be discussed with the Ministry of OCW and the Ministry of Social Affairs and Labor SZW during the visit of Zagers and Island Secretary Tim Muller to The Hague in the first week of July.

The Sub Plan of Action for the expansion of SHS was drafted following the larger Master Plan of Action that covers the housing of education on Saba. The expansion of SHS was marked as high priority. The current SHS building is more than 30 years old and more space is needed because of the increased number of students. The expansion of the kindergarten in particular is urgent. By moving the two kindergarten classes to the new building, much-needed space will be created for the other (growing) classes.

The daycare is currently partially housed in the former Governor’s House as a temporary measure. The building doesn’t comply with all requirements and is also getting too small for the growing number of children. An additional issue at the daycare is the fact that a number of children who have reached the age to go to kindergarten cannot make this transition because the kindergarten is already at maximum capacity.

The parties involved in this project, the school, the daycare, afterschool care, the ministries and the Public Entity Saba, all agree that the two new buildings will contribute to a healthy school climate and a safe, stimulating learning environment. The new buildings will comply with general technical requirements and guidelines with regard to educational facilities and the space per child.

In the initial plan, the two buildings were designed with one level, but in the new plan there will be two levels. This adaptation required a redesigning of the project which resulted in a longer preparation time. Other causes of delay include the COVID-19 pandemic and the lockdown.

Bobby Zagers and Evita Pronk of the Planning Bureau stated that a lot of preparation went into this project, also because multiple parties are involved: the school, the daycare, afterschool care, the ministries and the local government.

The Public Entity Saba is aiming to have the bidding process for the SHS expansion project later this year. Commissioner Zagers stated during the meeting with the Island Council that the funding was not sufficient to execute all the school projects. The sharp increase in construction costs by about 25 per cent with higher prices for both construction materials and transportation, is an important factor.

Island Council Members Hemmie van Xanten and Carl Buncamper during the June 1 meeting asked about the funding for the SCS which is in dire need of additional space, major maintenance of its current location, while the building which houses the technical classrooms is obsolete and needs to be completely rebuilt.

“If this had been the Netherlands, the new building would have been financed and constructed long time. Why is a school in the Netherlands more important than a school on Saba?” said Buncamper.

Van Xanten said it was “wonderful” that Saba was getting two new buildings for the SHS, the daycare and afterschool care, but what actually is needed are two entirely new schools. “The buildings are outdated. Bonaire got new schools. Every child has a right to a proper school building. Our children deserve more. It is time we step up and demand that we are treated equally,” he said.

Buncamper and Van Xanten said that they would bring up this matter in the meetings that the Island Council delegation will have in The Hague late June with the Second and First Chamber of the Dutch Parliament and other entities.

“The process to get this project started continues to be slow and frustrating.  Many years have passed with basically no progress and this will have significant consequences for the budget which is no longer sufficient. A lack of maintenance and a growing number of students continues to be a burden on the existing facilities. Discussions about the next steps and the budget are necessary to ensure that these projects can finally get started,” said Commissioner Zagers.