The ‘Tijdelijke subsidieregeling loonkosten en inkomensverlies CN’ (CN Temporary wage costs and loss of income subsidy scheme) and the ‘Regeling subsidie financiering vaste lasten getroffen ondernemingen Covid-19 BES’ (Financing fixed costs of affected enterprises Covid-19 BES subsidy scheme) will end this month. The demissionary cabinet sees no reason to deviate from the decision for the European Netherlands, where the corona support schemes have meanwhile ended. In total, through these two schemes, around 98 million dollars were paid out on Bonaire, Saba and St. Eustatius. The execution lies with the SZW-unit of RCN. 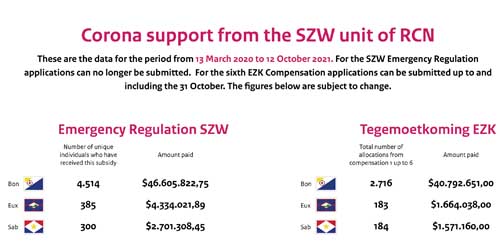 The so-called ‘SZW Emergency Regulation’ supported employers so they could keep the employees in service, who they could not keep at work during the crisis. This benefit came from the Ministry of Social Affairs and Employment. According to the latest overviews 699 employers used the regulation for a total of 3535 employees. In addition, the incomes of 1079 independent entrepreneurs were supplemented, and 585 former employees (who could not keep their jobs) received a benefit through the regulation. The exact final amount is not yet known, because some cases are still pending, but it concerns a total of about 54 million dollars. The SZW Emergency Regulation ended on 13 October 2021, exactly 19 months after it started. It is no longer possible to submit an application.

The ‘EZK Compensation’ is a subsidy from the Ministry of Economic Affairs and Climate to help entrepreneurs pay their fixed costs during the crisis. The compensation consists of six successive schemes. Based on the latest overviews, 901 entrepreneurs made use of the first scheme, 563 of the second, 457 of the third, 419 of the fourth and 453 of the fifth. To date, 290 payments have been made for the sixth scheme. Applications can still be submitted for the sixth scheme until 31 October. The total final amount seems to be around 44 million dollars.

A follow-up check will take place in the first quarter of 2022. Companies that are in the sample must substantiate the information they have given on their application form with further documentation.