Inflation rate up again in the Caribbean Netherlands

In the third quarter of 2021, consumer goods and services on Bonaire were 4.3 percent more expensive than one year previously. Inflation still stood at 0.3 percent in the second quarter. On St Eustatius, prices rose by 2.4 percent year-on-year in the third quarter. Prices still declined by 1.2 percent in Q2. On Saba, the inflation rate rose from 1.0 percent to 3.2 percent in Q3. This is reported by Statistics Netherlands (CBS) on the basis of the consumer price index for the Caribbean Netherlands. 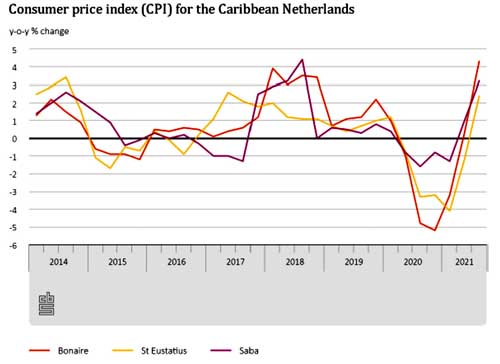 Inflation on Saba rises to 3.2 percent

In Q3 2021, consumers on Saba paid 3.2 percent more for goods and services compared to the previous year. The inflation rate was still 1.0 percent in the second quarter. The rising inflation rate in Q3 was mainly due to the increase in electricity prices, by over 36 percent.
Consumer prices were up by 1.7 percent on the previous quarter in Q3. Housing became 3.2 percent more expensive due to price increases in electricity and construction materials; petrol prices rose by 2.6 percent.

The higher inflation on Bonaire is mainly due to rising costs of housing and transportation. Prices of electricity were 20 percent up on the same quarter in 2020. Petrol was over 19 percent more expensive than one year previously.
The childcare subsidy1 had a dampening effect on inflation. Childcare was 28 percent cheaper than one year previously.

In Q3 2021, prices on Bonaire rose by 1.0 percent relative to Q2. Average food prices remained fairly stable relative to the previous quarter. Electricity prices increased by 8.8 percent. Petrol was 5.7 percent and diesel over 11 percent more expensive. Prices of self-care medicines were up by 6.7 percent. Childcare was 28 percent cheaper than in the previous quarter.
Inflation on St Eustatius 2.4 percent

In Q3 2021, consumer prices on St Eustatius rose by 2.4 percent year-on-year. There was still a 1.2-percent price decline in Q2. The rising inflation rate in Q3 is mainly due to the increase in electricity prices, by over 28 percent. The childcare subsidy2 had a dampening effect on inflation. Childcare was over 32 percent cheaper than one year previously.
Compared to the previous quarter, consumers paid 1.6 percent more for goods and services in Q3. Electricity prices increased by 16.2 percent. Petrol rose more than 3 percent in price. Both fresh fruit and vegetables were more expensive than in Q2, by 10 and by over 2 percent respectively. Childcare was over 26 percent cheaper than in Q2.
Inflation on Saba 3.2 percent